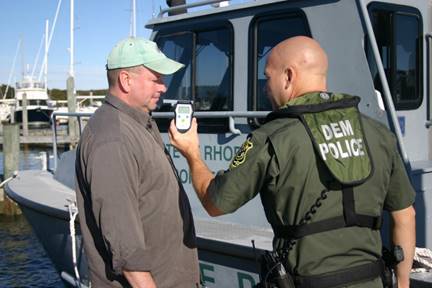 PROVIDENCE, RI – The Department of Environmental Management (DEM) and the US Coast Guard, urge boaters to not operate their boats under the influence of alcohol or drugs as they begin DUI patrols for the Fourth of July.

The agencies announce they’re ramping up enforcement efforts as part of a national crackdown on impaired boating.

The annual Operation Dry Water campaign focuses on reducing the number of alcohol- and drug-related accidents and fatalities, deterring alcohol and drug use on the water through DUI patrols, and raising awareness of the seriousness of the problem. DEM’s Environmental Police Officers will be conducting increased patrols Saturday, July 2, through Monday, July 4, monitoring for boaters under the influence of alcohol or drugs.

“The tragedies that happen on our waterways because individuals choose to boat while impaired are totally preventable,” said Lieutenant Michael Schipritt with DEM’s Division of Law Enforcement. “As law enforcement, it is our job to do everything we can to ensure the safety of recreational boaters and paddlers. That is why the Rhode Island Environmental Police are joining all 56 states and US territories to do our part in keeping boaters safe and preventing incidents, injuries, and deaths caused by boating under the influence.”

During the three-day, heightened awareness and enforcement campaign, DEM and other law enforcement agencies nationwide will be out in force during DUI patrols, looking for boaters who choose to boat under the influence and removing them from the water. Enhanced awareness messaging about the dangers of boating under the influence, along with an increased number of officers on the water, aim to cut down on the number of accidents and deaths due to impaired boating.

Impairment can be even more dangerous for boaters than for drivers because most boaters have less experience and confidence operating a boat than they do operating a car. In addition, factors that are common to boating such as sun, wind, noise, vibration, and motion can intensify the effects of alcohol, drugs, and some medications.

US Coast Guard statistics show that alcohol use is the leading cause of recreational boating deaths, with 18% of all recreational boating fatalities nationwide attributed to it. There are nearly 40,000 registered boats in Rhode Island. According to RI law, the limits (.08 blood alcohol content) and penalties are the same for driving and boating under the influence. Testing standards also are consistent.