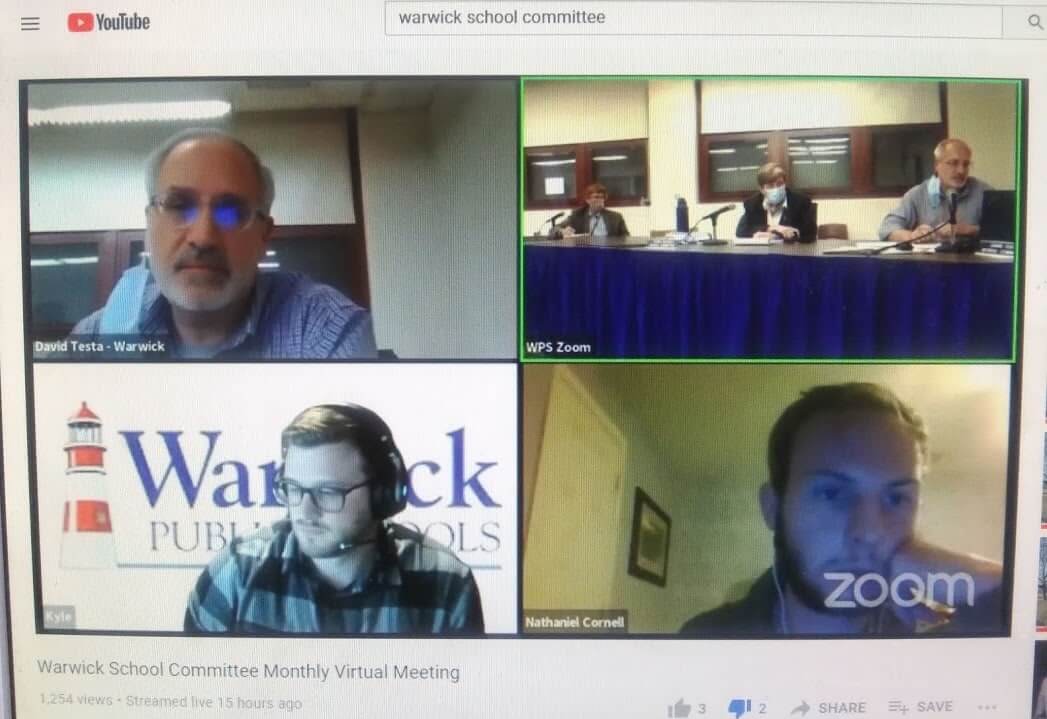 The committee selected Option C for Pilgrim. That plan will include a two-story addition at the front of the building. The total cost would be $176.7 million and the length of construction would be 36 months.

The committee also chose Option C for Toll Gate. The $125.4 million cost would include a center courtyard which could serve as an interior food court/mall space with a skylight ceiling, which would also be used as a media center. Construction would last for 36 months.

The projects will be presented to the Rhode Island Department of Education (RIDE) for their approval. The deadline for Stage One is Sept. 15.

Different proposals for the high schools were presented by Frank Locker, who is in charge of Educational Planning. The committee had retained the services of Saam Architecture of Boston to create a high school master plan for $111,300 in December 2019.

“It was important for (William) McCaffrey (Director of Secondary Education) and myself to reinvent schools and reenergize the public, the excitement to attend our high schools and I do think delaying this plan will cause a problem with that. Also, we are going forward with twenty-first century learning and yet we have the traditional classroom spaces that don’t work with twenty-first century learning,” Dambruch said.

Robert Baxter, the Director of Finance and Operations for the district, told the committee that Warwick has suffered a population decline, and the school rebuild plans don’t take that into account.

“The nature and the structure of the district has changed,” Baxter said. “Our enrollment decline has been significant pre-Covid. My concerns really fall onto two things. One isn’t so much that we have two high schools but the location of the high schools. The fact that we will be investing a significant amount of funding at the Toll Gate campus where on that side of the city we’re projected to have about 450 high school students is to me operationally and in terms of equity for the students, just ludicrous. We will be busing about 700 students across town to fill that high school.”

“We have two proposals on the table and I definitely want to hear them both out and looked into because this is not a light decision,” said committee vice-chair Nathan Cornell. “I would be for postponing this decision a month so both sides can put together their proposals and we can hear the final result. I haven’t made a decision yet because I want to hear both sides. This is a big decision which will impact this city for decades to come.”

Committee member David Testa was angered by Cornell’s suggestion to hold off on a decision.

“If you want to see another proposal on relocating Toll Gate, you should have said that at the last meeting when Mr. Locker first presented,” Testa said. “We are becoming the Keystone cops here. There’s a year and a half worth of work into this project. If we put this off a month, we’ve killed it. This is the plan on the table. Either we’re going to vote it up or we’re going to vote it down.”

They voted it up, unanimously.

Cornell said he wasn’t aware further delay would kill the project, and took pains to point out that had not been his intent.

The committee split 3-2 on approving a collective bargaining agreement with the Warwick Teachers Union.

Cobden acknowledged she wasn’t completely pleased with the terms of the agreement, but acknowledged the current political climate.

“The environment is not good,” Cobden said. “We have an angry angry community. People are angry because we’ve been in a pandemic and everybody’s life has been turned upside down. We need to make sure that when we go to school in September, that our (students) get 150 percent of what they deserve. If we go to court at this time, we’re not going to get the 150 percent. I don’t think this a time to pick the battle. The tentative agreement is going to be thrown out the window and we’re going to be starting from scratch. It’s going to go on for years just like it did last time and I object to doing that right now. I don’t think it’s fair to our children right now.”