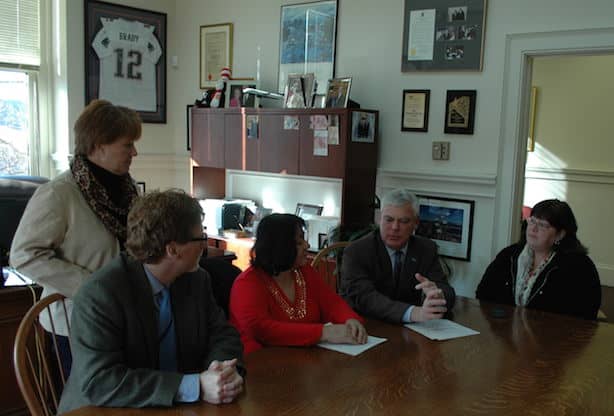 Warwick, RI — If the School Committee and City Council each vote to release $5.2 million of $25 million in school improvement bonds voters approved in 2006, the City and School Department have agreed to share the cost of debt principal and interest fifty-fifty for the first year.

“I think there were some years where there wasn’t a lot of trust between the two entities. I will tell you our new superintendent has done an incredible job at rebuilding that relationship, and getting people on the same page, and all talking with one another and sharing information,” Avedisian said.

In 2006, voters approved $25 million in school facilities improvement bonds in a 27,949 – 9,138 vote. Since then, said Mayor Scott Avedisian, the city has released the bond funding for school building repairs five times.

Most recently, said School Committee member Eugene Nadeau, those funds were released in three $3.1 million installments in 2012, 2013, and 2014 to pay for fire code upgrades required by the state in the wake of the 2003 Station Nightclub Fire.

Warwick Schools agreed to pay debt service on the bonds at the time, Nadeau said, to ensure their release when the State Fire Marshal threatened to close down schools if the department failed to bring school buildings up to new fire code standards.

But, Nadeau said, the deal was a rotten one, since the language of the bond question approved by voters lays the debt service responsibility with the City.

Also, Nadeau said, upkeep of school buildings, which the City owns, is the city’s responsibility. So, he said, while the City’s pledge to take on half the debt service for the new bond release doesn’t sit well with him, the compromise is a “Step in the right direction.”

Avedisian said City and School officials have agreed to review the compromise on debt service each year, taking into account whether either entity has realized a surplus. The School Department has a $3 million surplus this year, according to the Mayor’s office.

Thornton said $3.5 million of the bond release will be used for a new heating system at Warwick Veterans High School, which is expected to be converted into a middle school over the summer for next year.

Four people: Councilman Edgar Ladouceur, Maintenance Division Supervisor Joseph Blake, James Feeney, and Mark Carruolo, will be appointed to work with school officials to oversee the bond, meeting quarterly over the next two years, focusing only the bond funded projects.

“One of the concerns that my administration and many City Councilors have had over the years is that bond funds have not been spent as wisely and as cost-effectively as possible, and that there was a lack of information provided to us by the School Department relative to these concerns, Avedisian wrote in a release about the compromise.

“This proposal is something that will allow the School Committee to move forward with necessary improvements to our schools, while being fair to the taxpayers and to the City, which has for many years carried the burden of school debt,” said Travis. “While I agree that the schools should be responsible for repaying their debt, this proposal is a good step as we start a new relationship with the schools.”