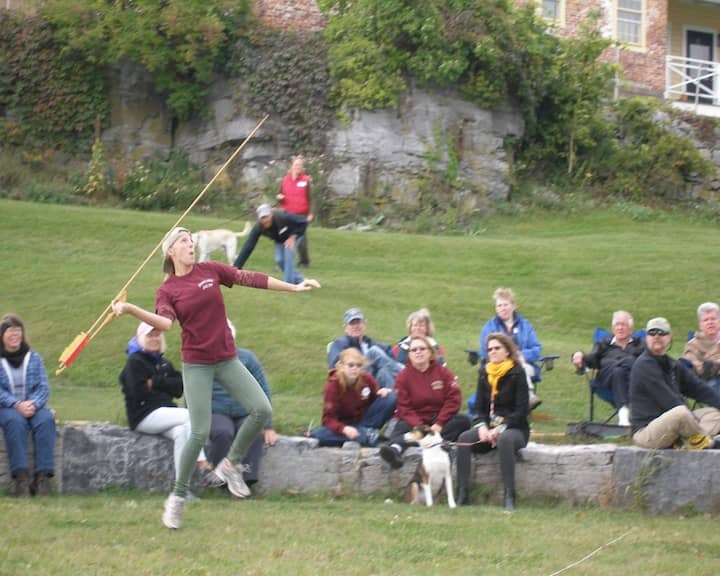 Warwick, RI – If you’re recruiting a time-traveling team to the Paleolithic era, Kelsey Devlin would be a good candidate.

Sport hunters in the here and now are out of luck in the face of Devlin’s gold-medal-winning skills with the atlatl, a spear-throwing tool in worldwide use at the time.

“I’m against killing animals, so no,” said the 2011 Warwick Veterans Memorial High School grad and Franklin Pierce University senior when asked if she uses her skills outside scholarly competitions.

Devlin, daughter of Cheryl and John Devlin of Warwick, won her medal as part of Franklin Pierce University’s Atlatl Team at the 19th Annual Northeast Open Atlatl Championship in Addison, Vt., on Sept. 20. The competition involves both distance and accuracy, said Devlin, who’s also the team captain. At 50 yards, she scored 68 points to the second-place competitor’s 32.

The atlatl, a wooden launcher that adds to the length of a thrower’s arm to increase the range and force of a thrown spear, is not as well known as spears or bows.

“I would say it’s the weird cousin of archery,” said Devlin. Later hunting technology, such as the bow and arrow, are more accurate and flashier, so they get the nod in popular culture, she said.

Franklin Pierce boasts one of the nation’s only competitive atlatl teams. Professor Robert Goodby founded it about 10 years ago to give his students better insight into Native American culture through using the weapon.

Devlin’s skill in the Atlatl was developed during her years as a member of the Anthropology Club, to which she was recently elected president. Every Thursday, members of the club practice their aim with the ancient throwing tool, she said.

New students are often surprised to see Devlin and her teammates hurl spears toward their targets – hay bales draped with tarps painted to resemble deer – in a field at the center of campus. But it doesn’t take long for them to start cheering after the novelty wears off.

Franklin Pierce University was Devlin’s first and only choice of schools. She worked with Alan Leveillee at the Public Archeology Laboratory (PAL) in Pawtucket for her senior project. She was introduced to the lesser-known aspects of archeology, including cleaning and categorizing artifacts, she said, and learned about Goodby’s program from Leveillee.

Devlin said she applied to Franklin Pierce University so she could study with Goodby. She was accepted, and now the young archaeologist has her sights set on Texas A&M University, which has an underwater archeology program in Turkey. Devlin said she hopes to spend her post-graduate studies there studying shipwrecks in the Mediterranean Sea.

Though the area is not a welcoming one for westerners, with the insurgent Islamic State’s aggressive and brutal spread through Iraq, Devlin is not allowing that to color her decisions about her future. She said she feels she’ll be far enough away from the fighting to be safe.

Though she is aware Americans and western hostages have been killed by the Islamic State fighters, Devlin said she won’t be scared away from her work. Should she die during her studies, she said, “At least I’ll be doing what I love.”

Besides the risk, archaeology is also unlikely to make her rich, Devlin said, but that’s OK, as her dad has taught her.

“Doing what you love over earning the dollar that you make is really all that matters,” Devlin said.