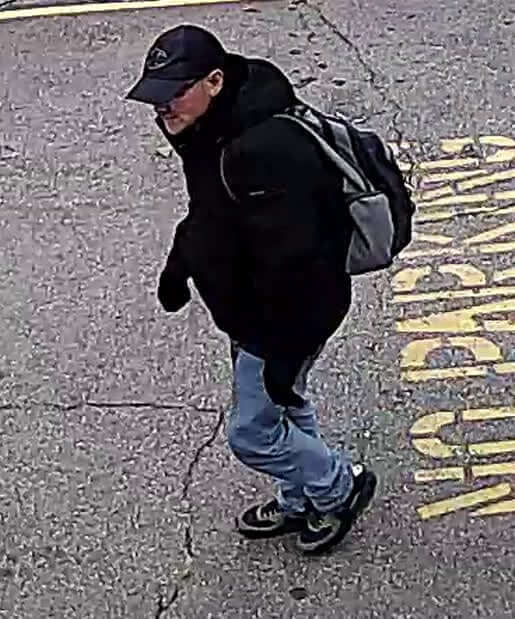 WARWICK, RI — Warwick Police have shared photos of a suspect they’re seeking in an Oct. 30 carjacking of a 2017 Hyundai Santa Fe stolen at knifepoint from the Joann Stores lot at 1500 Bald Hill Road.
Police report that at 9:05 a.m. that day, a 63-year-old woman reported her gray 2017 Hyundai Santa Fe, with plate reading  XR-103 was stolen at knife point in the lot.
The woman described the suspect as a white man with glasses, grayish brown hair, in his 20s-40s, thin build,  about 5’3”-5’9” tall, wearing a dark jacket, black/grey hat, blue jeans, and black sneakers. He was wearing a black bulky backpack that was covered by a trash bag. The man also struck a witness in the parking lot with the stolen vehicle prior to fleeing onto Bald Hill Road.
The same male suspect is believed to have been involved in a similar incident on Oct. 29, wearing a different pair of shoes.
“Anyone who has information regarding the identity or location of the male suspect or knows the current location of the stolen vehicle, should contact the Warwick Police Department immediately at 401-468-4200 or contact Detective Christian Vargas with information (401-468-4260 or christian.vargas@warwickri.com). The male suspect should be considered armed and dangerous and should not be approached by members of the public,” WPD reported on their Facebook page Saturday.