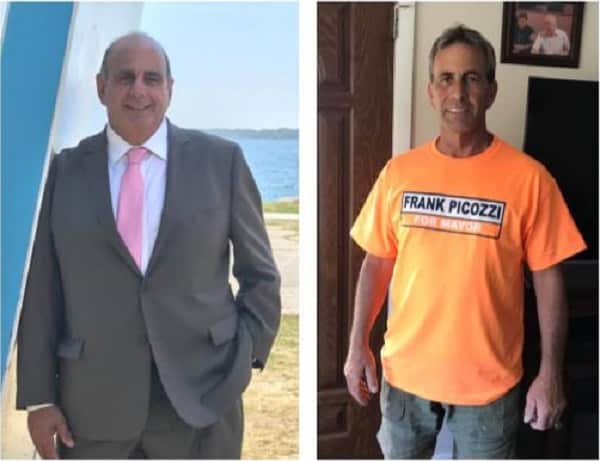 WARWICK, RI — A day after the election and with days left on the RI Board of Elections vote count timeline, Democrat Mayor Joseph J. Solomon conceded the race to Independent challenger Frank Picozzi.

While an undetermined number of mail-in ballots, in 27 locked boxes from each polling place still need to be counted by the RI Board of Elections for the final, official numbers, if the percentage of votes among the new ballots remains the same, Picozzi would receive 59.3 percent of the vote to Solomon’s 40.4 percent.

The Board of Elections announced Wednesday it would begin counting the mail-in ballots in drop boxes statewide today.

Solomon did not wait for the new votes to be tallied, issuing a statement conceding the race on Wednesday:

“I’d like to thank everyone who has supported me. While this election didn’t go as we had hoped, we ran a fair race and stuck to the issues.

I’d also like to thank my family, who has been by my side through it all.

Being Mayor of Warwick is a tough job, but it’s also a great honor. While my tenure as Mayor is coming to a close, my commitment to this great city is as strong as ever. I’m proud of the progress we have made, and I know that I’m leaving our city in better shape now that it was two years ago.

I wish my successor the very best of luck.”

“Thank you Warwick. I am honored and humbled by the confidence and faith that you’ve placed in me.

My administration will have absolute transparency and be completely void of political games. I will also keep in touch with you like no mayor ever has and I’ll listen to you and involve you.

I’ll do this job with passion and dedication and I pledge to you that every decision that I make will always be in the best interests of the residents of this city.

I love this city and I love this community and I will never forget who it is that I work for and who it was that put me in office.

When reached Wednesday night, the upbeat but fatigued Mayor-elect said he had not heard of Solomon’s concession from Solomon himself. When asked if the Mayor had reached out to him with a congratulatory phone call,  “I just found out on Channel 10,” Picozzi said.

The new mayor said he approached election night with a sense of calm, but wound up getting to bed at 3:30 a.m. He was woken at 5:30 a.m. by a reporter’s text asking about the race.

“I was very surprised,” by the outcome, Picozzi said. He said he watched the results at it became clear Solomon had the advantage in early and mail-in ballots being tallied, but that he was gaining as people voted during election day itself.

Picozzi said his immediate task is putting together a transition team, the first time that has likely needed to be done to the degree needed now since Lincoln Chafee defeated Charles Donovan in the 1993 Mayoral race. Even when Solomon was appointed upon Mayor Scott Avedisian’s resignation, he said, much staff overlap has remained between administrations.

Also, Picozzi said, he’s eager to get an official look at the city’s finances.

“I’m certain that Mayor Solomon will be cooperative,” Picozzi said.

As to who will serve in his administration, that remains to be seen. As an independent challenger to an incumbent mayor with decades of experience in city government, Picozzi said, “I didn’t really get a lot of serious replies from people,” while he was recruiting for a possible victory earlier in his campaign.

His administration will seek new, but experienced members, from other communities if necessary, without much concern for political considerations.

“I want to take politics completely out of the city,” Picozzi said.

The new mayor, a former Warwick School Committee member, said he is also planning to put some action into the words spoken in recent years about cooperation between school and city officials. He is organizing a council including Warwick Schools Superintendent Phil Thornton, City Council members and teachers, among others. Picozzi said that effort is developing as he continues to organize his office.

The new council, he said, will cooperate to head off budget crises and other challenges that the city and schools typically tackle as a disparate group during budget hearings. He said they will be, “Pooling resources, see who can help each other,” during their meetings.

Meanwhile, the Board of Elections announced the following timeline for the final vote counts:

Nov. 7 – 9
Provisional ballots results will be added to Polling Place Results and will be made available on the Board of Elections’ website.