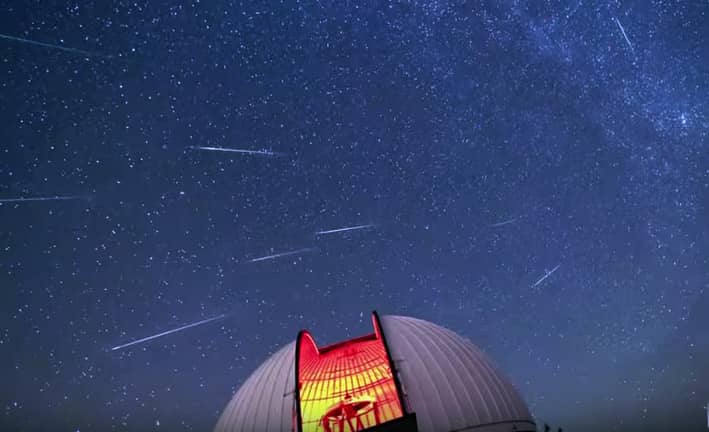 The Perseid Meteor Shower, annually timed during the dog days of summer, occur free of competing moonlight this year, peaking between now and Friday, with Thursday night’s forecast fair and mostly cloud-free.

The rest of the Perseid’s peak viewing days this year fall on what are unfortunate weather events: thunderstorms Tuesday, cloudy skies Wednesday, then cloudy skies again on Friday. Thursday, though, boasts a forecast mostly clear of clouds with no inclement weather, a crucial element of a successful meteor shower viewing often overlooked by breathless previews of the event.

Avid stargazers will likely be glimpsing the Perseids for the first time since 2013, as The Christian Science Monitor reported  that 2014’s Perseids were washed out by a bright moon.

Wednesday evening, which promises partly cloudy skies, may well be worth trying your luck, though, as that’s the day the Frosty Drew Observatory in Charlestown (the best spot in the state for stargazing with as little light pollution as possible) will host their viewing event of the Perseids, when as many as 100 meteors per hour will be visible in between drifting clouds as midnight gives way to early morning, the peak viewing hours for the meteors.

Frosty Drew will open their Observatory and Sky Theatre at 8:30 p.m. In the Observatory, telescopes will showcase the night sky from 8:30 – 11 p.m. with views of Saturn, nebulae, star clusters, and galaxies. After 11 p.m., they’ll bring viewers outside to gaze at the spectacular meteor shower.

If Charlestown doesn’t suit you as a destination, try your luck with any open field out west in Coventry, or further west in Connecticut if you’re the adventurous type. The further you move from city lights and highways, the better your chances for viewing the show.

What are the Perseids?

The Perseids and the spectacular meteor shower show they’re known for are created by the debris field from Comet Swift Tuttle, which the Earth passes though every August. Pieces from the comet, meteors, strike the Earth’s atmosphere at 132,000 mph, burning up and creating the fireball effect, according to NASA.gov.

(Meteorites are meteors that survive their firey encounter with the atmosphere and strike the Earth.)

The Perseids were named so because the meteors viewed appear to be approaching from the constellation Perseus.

Any spot far from city/town lights. The farther you get from town, the better your view will be.

This week the best days for viewing fall on Aug. 12 and Aug. 13, just after midnight.