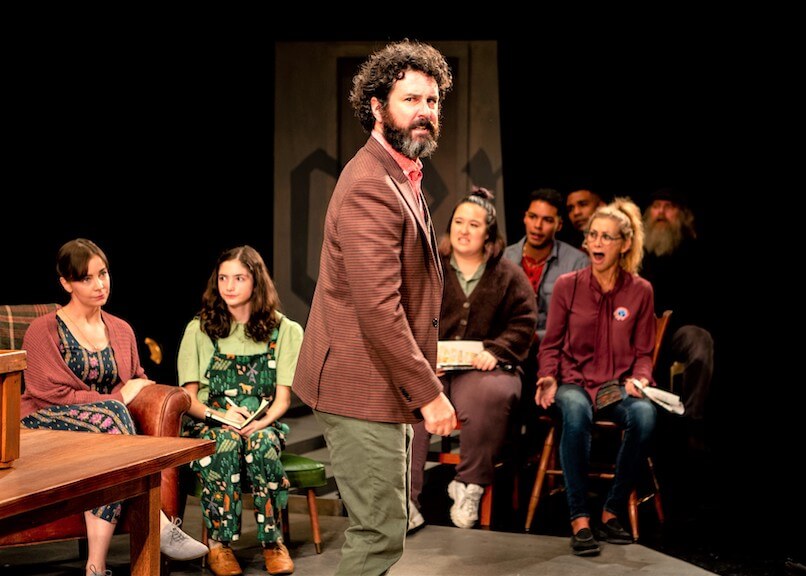 WARWICK, RI — In Gamm Theatre‘s  “A Lie Agreed Upon,” based on Henrik Ibsen’s “An Enemy of The People,” a community is torn apart by a major health crisis.

The Gamm Theatre’s 37th season opener explores the moral dilemma of a man who is forced to choose between either maintaining his own integrity or sacrificing it for the good of others.

The town of Springfield derives most of its revenue from “the baths,” a series of outdoor watering holes. After Dr. Thomas Stockman reveals the baths are contaminated and need to be shut down to protect public safety, he is branded as an “enemy of the people” and becomes a pariah.

The Gamm’s Artistic Director Tony Estrella, who wrote and directed this production, has created an explosive drama which has eerie echoes of the COVID-19 pandemic. The details of the threat are different but the sentiments are all too familiar.

Thomas warns his brother Peter, the Mayor of Springfield, about the serious health risks of the polluted water. The two men bitterly clash when Peter explains the people don’t want “the truth,” but rather, reassurance. Thomas says he is basing his report on “the facts” but Peter remains skeptical.

The staff of The Messenger, the town newspaper, are caught in the middle of the battle between the Stockmans. Peter warns them if they print Thomas’ report on the pollution, the town’s businesses will suffer and taxes will be increased. In addition, repairing the lines which transport water to the baths will take a lot of time and cost a lot of money. Is Thomas being selfish by jeopardizing the town’s future for his own seemingly self-righteous crusade?

Estrella has generated top-rate performances from the cast, especially Sean McConaghy (“Julius Caesar”) as Thomas and Jonathan Higginbotham (“JQA”) as Peter. The two actors are riveting in their scenes together as each brother refuses to cede their ground. For Peter, Thomas’ report on the baths is a personal affront as well as a betrayal. Peter, who appointed Thomas Chief Medical Officer, accuses him of trying to sabotage his career.

Nora Eschenheimer (“As You Like It”) is effective as brassy Thea Hovstad, the editor of the newspaper. Thea prides herself on maintaining high journalistic standards but isn’t immune to political pressure.

Other standouts were Joe Penczak as Morten Kiil, Thomas’s father-in-law who owns the tannery which is responsible for the contamination of the baths; Aryn Mello Pryor as Thomas’ daughter Petra, an outspoken liberal who writes a column for the paper; Jomo Peters as Captain Horster, Thomas’ loyal friend, and Jason Quinn in an amusing turn as the town drunk.

Estrella masterfully escalates the tension in the play’s second act, which features an impassioned Thomas lambasting his fellow citizens for their ignorance and hypocrisy.

“A Lie Agreed Upon” is about ideas, such as the value of reason over emotion, the tyranny of the majority and mob rule, fascism over democracy, the demonization of our truth-tellers, and the risks which come with progress. We live in an era where people refuse to get vaccinated when faced with a deadly virus either out of ignorance or stubborn willfulness. Many of our politicians refuse to speak out against this insanity for fear of alienating their own constituents. In other words, they’re more interested in self-preservation than in saving lives.

The closing scene is truly haunting, a grim reminder of the damage we have inflicted upon the Earth, and to each other.

“A Lie Agreed Upon” is a testament to the divisions fracturing our country. It is one of the best shows of the year.