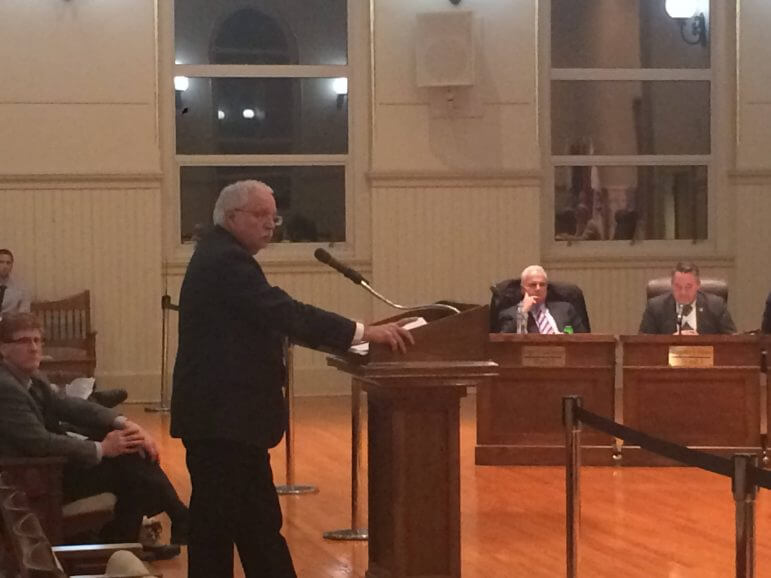 Intergovernmental Committee Councilmen Timothy Howe and James McElroy voted for the resolution, while Councilman Richard Corley voted against, citing his personal decision to stop finger-pointing in the years-long strained relationship between the Council and Schools.

The resolution will now be considered by the full council during the next meeting June 17.

The vote followed a lengthy meeting stretched to the limit of time allowed for Council business at about 11:30 p.m. Monday, and was the last item Councilors weighed in on before the meeting ended. The first several hours of the meeting was attended by several Toll Gate High and Pilgrim High students, who held signs protesting the School department’s lack of support in this year’s budget, receiving just $500,000 of a $7.7 million increase rquest.

“The folks that were here tonight were very upset, very emotional, and they have a right to be,” Ladouceur said. But, he said, they were not equipped with the whole story. Ladouceur said the Council is justified in withholding new funding given what he said was Ferrucci’s unilateral decision to fund pension payments beyond actuarial recommendations. Ladouceur said he was incredulous that Ferrucci had seemed proud of putting extra funding into the pension plan when other school needs wanted for money.

“Be proud that you were able to pay off your mortgage early, if you still had enough money left over to buy groceries,” Ladouceur said. “In the real world, certainly, you wouldn’t pay off the mortgage if you couldn’t buy the groceries.”

Several hours earlier, School Committee member David Testa said the City Council was aware of the Schools’ pension contributions, which he said were prudent, given the state-wide under-funding of pension plans. The contributions in excess of actuarial recommendations, he said, were warranted given news that mortality tables are likely to increase the pension fund’s liability as people live longer and collect more.

“Whatever the actuary said, we always put in more,” Testa said.

Sinapi reiterated that Ferrucci had been off on School Department health care costs by seven percent, criticized his refusal of community donations to for unpaid student lunch debt, and his apparent misstatement last year that Schools needed no less than $8 million, when, he said, it turned out they did not.

“Not only do I want the School Committee and us to work together, I want us to be able to trust each other. And we can’t trust each other as long as the main intermediary providing the numbers that both of us have to trust is Mr. Ferrucci. I want to give the School Committee the ammunition they need to help remove Mr. Ferrucci, and I believe this no confidence vote gives them that ammunition, if they didn’t have enough already,” Sinapi said.

“How is this related to a vote of no confidence on School administrator Anthony Ferrucci? Well, he was one of the first to know of this issue. And what exactly did he do? From documents I requested, it appears, not much. Rix said 2017 was one of the years Ferrucci paid $800,000 more than what actuaries had required into the School pension program, enough to have paid for replacing the fire alarms.

“It seems to me that Mr. Ferrucci did not take public safety seriously.”

“This goes to a pattern of behavior,” Rix said, “This is about organization, process, and I don’t think, fundamentally, that any of us can imagine something much more egregious as putting a fire alarm system, a public safety issue, just kind of, you know, in the back.”

“Every time he made one of these misrepresentations, it caused consequences, for students, faculty, staff, and the city as a whole,” Sinapi said. “When he insisted there was no money to pay custodians, it’s not just that the schools didn’t get cleaned and people got sick, although that did happen and that was egregious in itself. There was also more financial costs because of that. You’ve got to pay unemployment benefits for all the custodians that got laid off, when they shouldn’t have been. We had to pay for the deep cleans of the schools needed so people would stop getting sick. We had to pay for the costs of a Carulolo action and mediation, none of which would have needed to happen if Ferrucci had just done his job, for once.”

“He needs to go, and it’s long overdue,” Sinapi said.

“Generally, employment contracts are not unconditional. The employee is subject to certain standards, and I believe that a no-confidence vote may be helpful to bring some emphasis to this discussion. It may be helpful to bring some of these concerns regarding Mr. Ferrucci, properly, to the light, of the School Committee, should they find that Mr. Ferrucci’s actions may not be in accordance with his contract,” Rix said.